Hit enter to search or ESC to close
Institutional

Since the beginning of the pandemic until the middle of April, Brazil reached the mark of 361 thousand deaths caused by Covid, with more than 13 million people having had contact with the virus. The data are from the Brazilian National Council of Health Secretaries.

In view of this scenario, it is impossible to believe that only the public authorities would be able to provide care, medication and rehabilitation of patients. With that in mind, 15 entities from Santa Catarina, including companies, organizations and associations, mobilized to promote the “Alliance for Life” campaign, which started in March. So far, approximately R$ 3.5 million has been raised.

One of the companies behind this initiative is C-Pack Creative Packaging, a leader in the production of plastic tubes for cosmetics in Brazil and one of the largest in Latin America. “We have in our values ​​and purposes the constant concern for the well-being of our employees, especially for those who cannot work from home because they work directly in the production of plastic tubes. And health care also extends to the family of these people”, points out founder Luiz Gonzaga Coelho.

Gonzaga explains that C-Pack has a deep connection with associations and the health segment. “Our holding company also has a strong presence in the hospital and biotechnology segment, and, for this reason, we were already attuned to the possible evolution of the problem. When it was found that there would be a peak during the pandemic, we knew that just doubling the number of beds would not be enough. So much so that in our hospital in Greater Florianopolis we left 32 to 58 ICU beds, but that alone was not enough”, he highlights.

The founder recalls that together with the Federation of Industries of Santa Catarina, they sought civil society and the government so that together they could create structures for screening, care and treatment. “We were able to mobilize and design this project, which currently involves companies that work with telemedicine, monitoring patients to avoid inflammatory conditions, moving the ICU to the patient’s residence and communicating with the State, in case it is necessary to transfer this patient to a hospital”, He says.

Thanks to this campaign called “Alliance for Life”, it was possible to raise, in four weeks, approximately 3.5 million reais. “We needed to prepare the project and find funds to finance it. It was then that we started knocking on a lot of people’s doors”, he recalls.

What made this movement gain momentum and speed in execution was the fact that one of the pillars that drives C-Pack is the responsibility to provide the well-being in the society of which it is a part. “Institutions need to understand how important it is to the collective. Everything we have done to fight Covid-19 to date has a connection to everything we believe. Those who work at C-Pack must practice values ​​when they are returning to their homes, just as they bring and share experiences with the rest of the team. This concern is part of our mission and vision”, he concludes.

C-Pack’s actions along the pandemic

CEO José Maurício Coelho explains that since the beginning of the pandemic, there has been a concern to enable administration teams to work from home. Pregnant women or people in the high-risk group were sent home as soon as possible. “But always with the concern to provide an adequate structure for this employee to work”, he highlights.

Those who work directly in production continued to work, because C-Pack serves a niche that is classified as essential and for that reason it cannot stop. “We surround our employees with care. We increased the number of shuttles (home-C-Pack-home), carried out temperature measurements at the entrance and installed rooms in the cafeteria”, he says.

Employees already work with gloves, with masks having been included as a mandatory item, but the company already carries out its operations in a controlled environment, due to the good work practices already adopted.

C-Pack also started to manufacture alcohol gel plastic tubes for customers because there was a shortage of the product on the market. “We distributed 20,000 units free of charge in a larger volume to the community, police and firefighters, health surveillance, health posts and hospitals, but the biggest concern was with our employees, including some being tested more than once. To give you an idea, every time someone had symptoms, we tested all the colleagues around. We have conducted more than a thousand tests in the last year alone, because we had to provide security for people”, he recalls.

In addition to gel alcohol, the company got even closer to the community. “In the church in our neighborhood, we donated basic food baskets, milk and sustainability materials. We value the constant concern with the social and ecological aspect, both in structure, as in our activities and products”, he concludes.

Gel alcohol for entities in Greater Florianopolis and distribution of gel alcohol to employees.

In partnership with Cottonbaby, 22,000 units of alcohol gel were distributed to entities in the region.

About 120 hygiene and cleaning kits for the community of Sertão do Maruim in partnership with the company Armacell.

Alliance for life in numbers (until April 12)

The donations made it possible to make 2,351 calls. Five patients were referred to the Emergency Care Unit, 11 were referred to hospitals and at home, 121. Through telemedicine, 2,214 procedures were performed, and 137 patients received care in a Mobile ICU. 2,351 tests were also carried out, 20% of which were negative, 52% positive and 28% of those tested remain waiting. 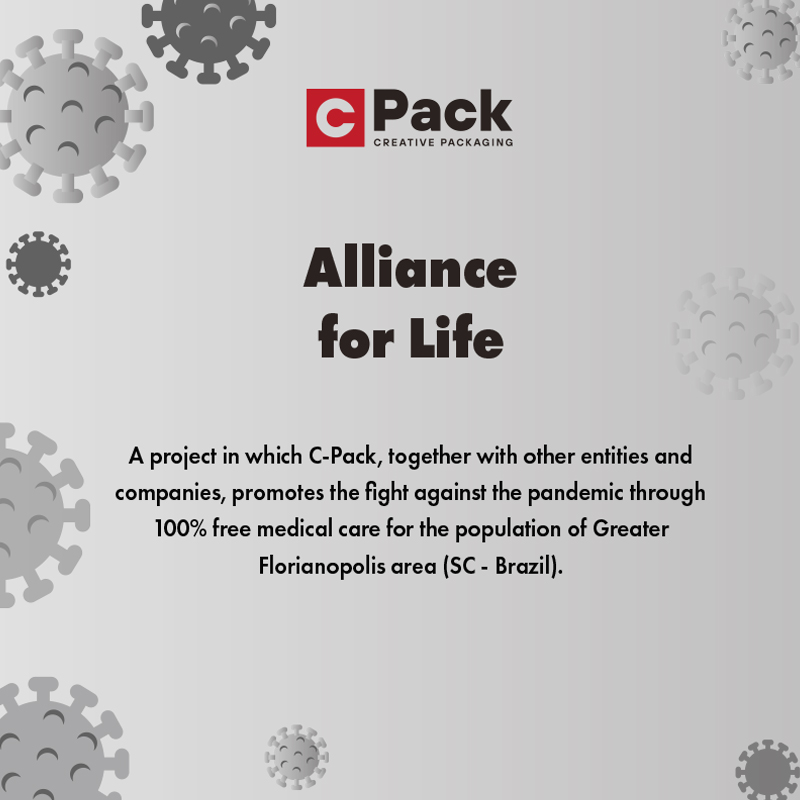 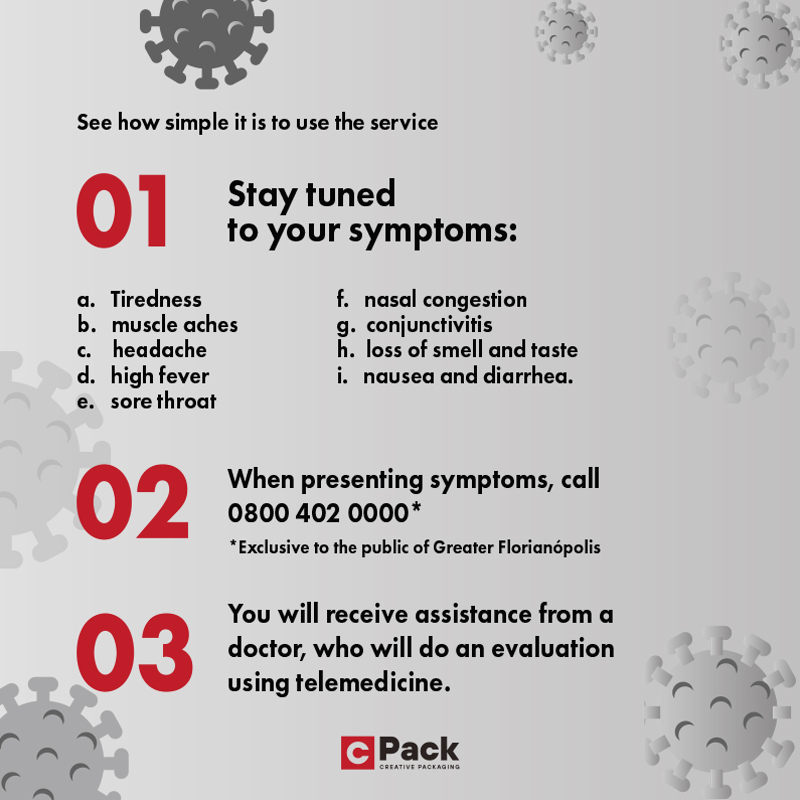 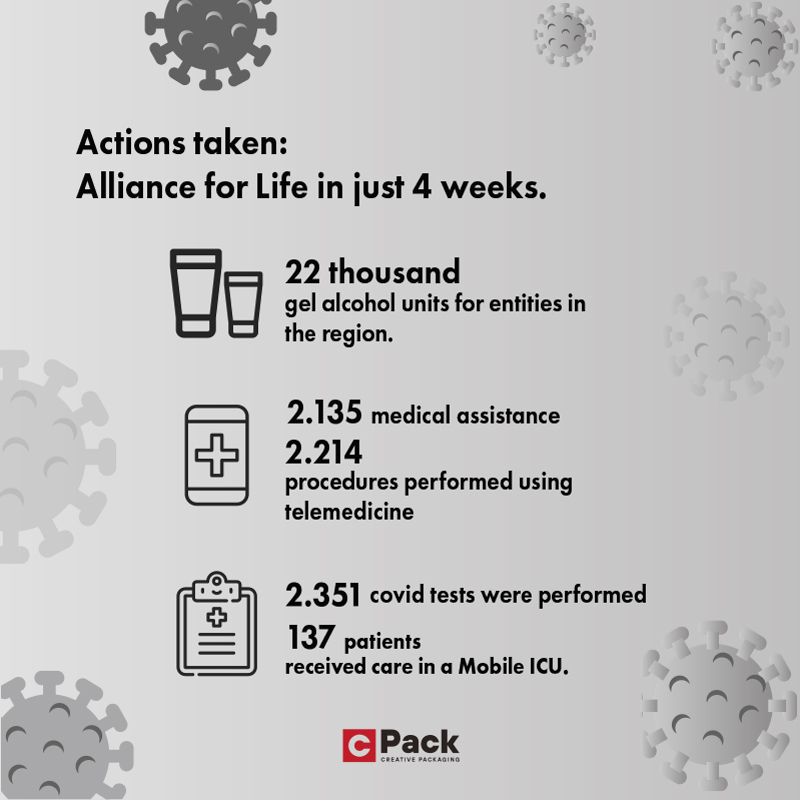 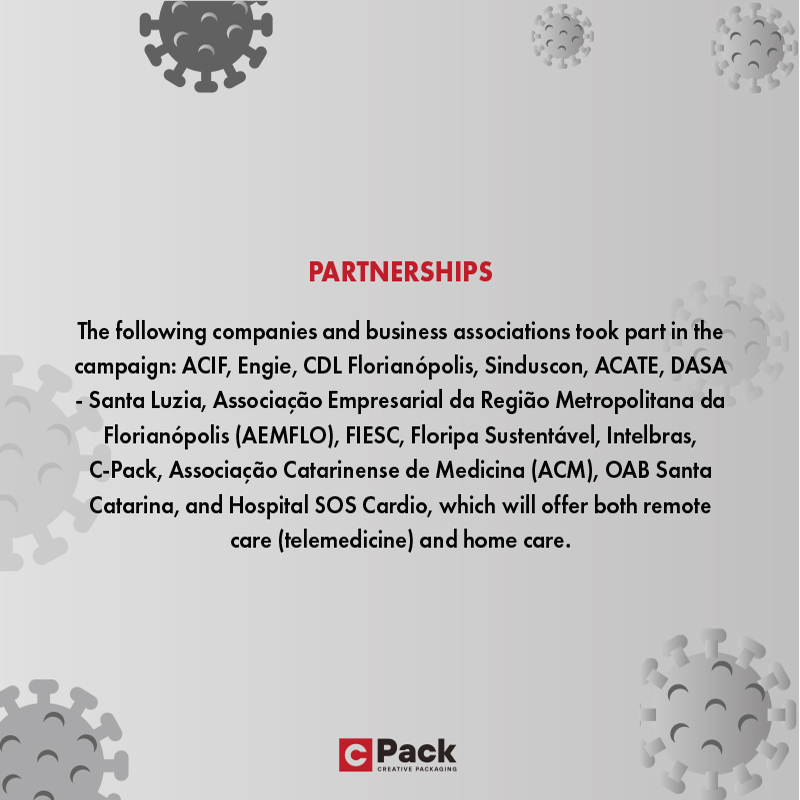 Made by Troupe Design Digital